Carol expressed an interest in the iPad this morning, so we made a little video...

Francis singing and playing the keyboard.

Francis is a very talented man and he's enthusiastic and a bundle of joy and he loves to make people laugh, I'm very happy to be his partner. I met him here at the Gate years ago and we got engaged and we wrote a couple of songs. Francis likes to sing and he likes to play the keyboard and here he is making up one of his songs on the spot.

Yo check this! 2Decks talking.
Thease videos were recorded in Brighton when we were doing our gig in the corn exchange
at the Blue Camel Club.
The venue was great, the music was great, the bands were great, I was great.
In fact everything was great.
There was even one point where my homeboys Francis and Jason were busting some moves on the dance floor.
This is one those gig that you should never say no to.
One of the things I like about brighton gigs is that you can go for walk and somthing to eat while your
waiting to do your sound check.
We could learn a lot from our brethren down carousel. 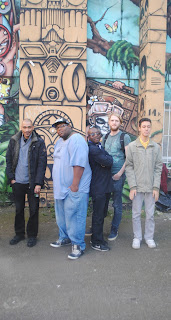 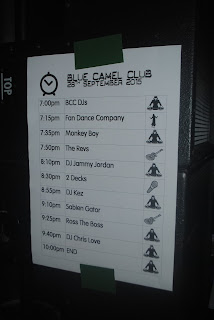 Email ThisBlogThis!Share to TwitterShare to FacebookShare to Pinterest
Labels: 2Decks


First Nick is walking around in the field with a basket in his hand, looking for strawberries.
Then he sings and he opens his mouth and colours and strawberries come out and that is very funny. He wears a hat, shoes, and a yellow shirt like mine.
Then Nick dances with his arms and his legs moving. His eyes are scary and his head’s come off. I think that’s really good.
Then he is doing Bollywood dancing with a strawberry instead of his head.
He is looking around with a basket in his hand and he picks strawberries.


Now I can see four guys and two hands with strawberries instead of fingers. I think that’s mad but I might do that soon at The Gate.
Then Nick walks on the road. That’s very dangerous because lorries and cars might come and knock him over. He might die.
Then he throws some heads around. I think that’s alright and I might do that sometime. I might do it with Sanjay’s and Louise’s and my own head. I might also saw Seb’s head off. And Mat’s.
Then Nick dances again. He is a very good dancer.
Then he holds a bunch of flowers in his hand. He might be in love with Louise or his wife Maunela or Sanjay, but I don’t know.


Then he goes to his garden shed and puts a basket on the bench and then he holds his chin in his hand and he’s looking at the people but there are no people there.
I like the video very much and I might watch it again on Monday. I might show it to Karliff and Louise and Mat.
Well done!
Love, Mary.
Posted by 54 the gate at 11:52

Email ThisBlogThis!Share to TwitterShare to FacebookShare to Pinterest
Labels: Mary 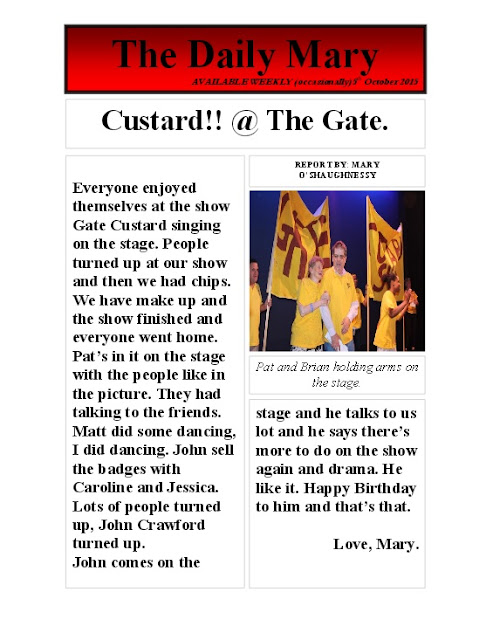