On 28th Feb the Gate headed to the ICA for our big clash with the lads from Sly & the Family Drone and our good friend Alan Courtis (of Reynols whose recent retrospective box set can be heard here) - 'twas an awesome night so big thanks from all of us here to everyone involved and to all who came. Here are some thoughts from some of the participants:

"My thought's and opinion about Jamaica, also experiencing the vibe that comes from the group and beside as well the family drone which i've been playing drums aside to and to be clearly honest it was a lot of fun and I had a blast banging time with them playing rhythmic tempos and beats all the way to the end, and as for everyone else the vibe was spectacular we we're all in it together including making a rhythm out of the noise plus we've managed to give the audience a good time and with my band 2decks it was great as well feeling the energy everywhere the room was nice and by the way the art work poster we've created to show what we really do in our spare time in daily activity with our own art gifts we bring to the table and if anyone see this and hopes to give a thumbs up and please do so you will really enjoy it because without our team work none of this would've happen'd anyway." Josh (2Decks/Jamaica!!)

"I really did enjoy doing the Jamaica!! collaboration gig with Sly & the Family Drone at the I.C.A. It is first time we have ever done a gig this big with all of my friends from The Gate. I give massive respect to Morag for letting us perform at her exhibition and big up to my homeboys Sly & the Family Drone." Darren (2Decks/Jamaica!!)

"I enjoy myself the band we played with was really amazing
i have a lot of fun it will do it again if the chance come again the night went well thanks to sly & the family drone." Ritchie (Jamaica!!)

"We took a taxi to Buckingham Palace of St. James. When we got there we had to sit down 'til we got called up. We did the sound before we started. Later they tried the drums and it sounded good. "Are there any more biscuits" i said for a joke. Then the time was getting near and the people were coming one by one. Then it started and people were dancing and a little girl came and joined us. It was loud when Sly & the Family Drone did their good sounds - smash up the sax was the main smash. Then we came on with the taps and drums so we played together with Sly band and it sounds good, it sounds like space sounds. I enjoy it, good night out." Leon (2Decks/Jamaica!!)

"It's good playing the drums with those people. I like it, I wanna go again." Mary (Jamaica!!) 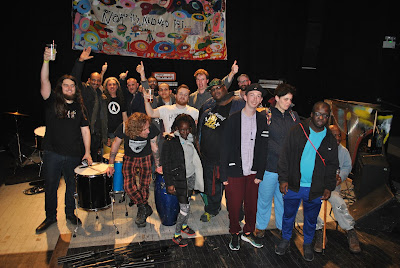