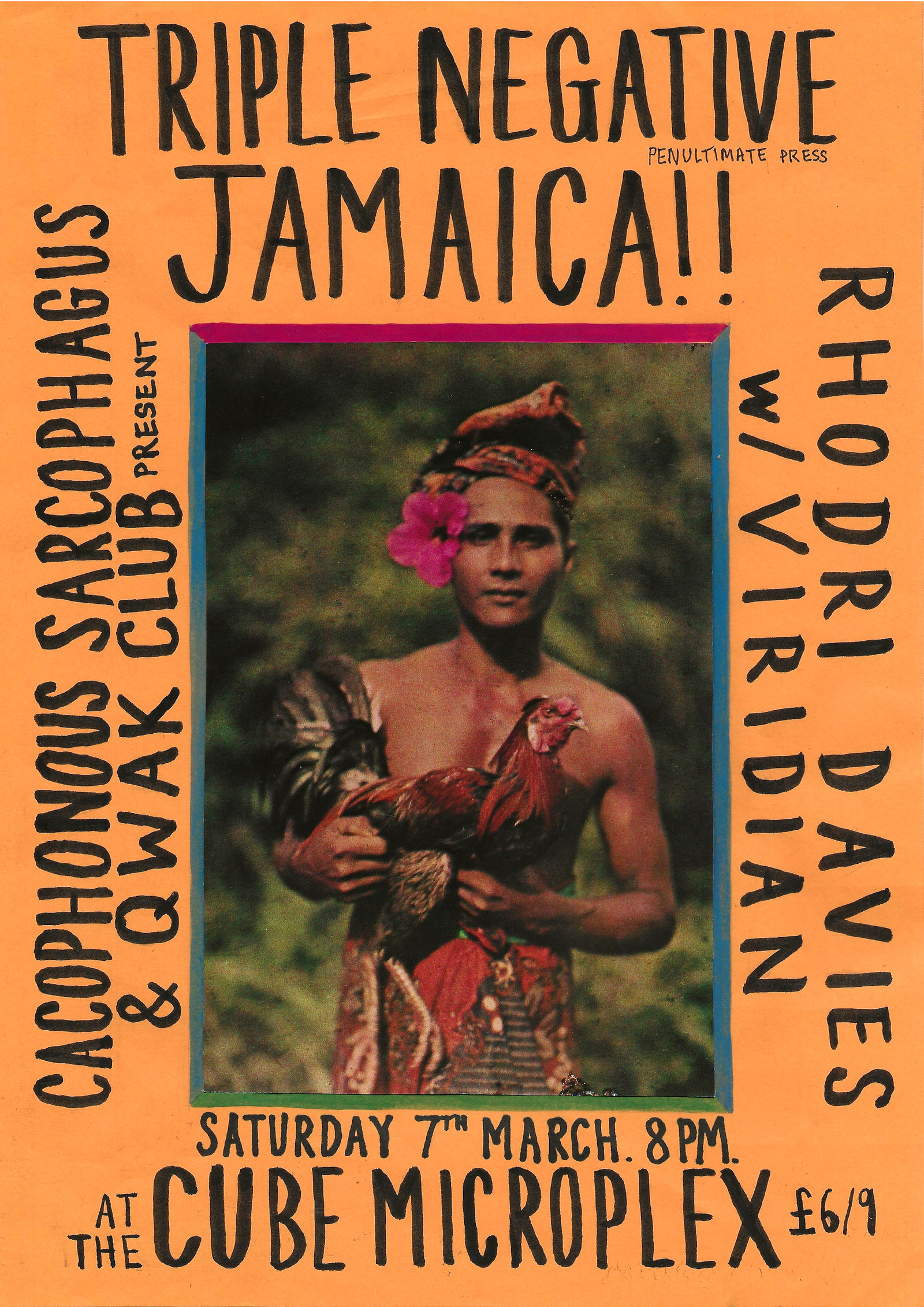 Cacophonous Sarcophagus and QWAK club present:
Triple Negative
"Three foreign sorts – a Kiwi, a German and a Romanian it says here – converge in London and make dough-thick improv rock-not-rock that sounds like they got all their mates in the studio to hoedown, holler and proclaim. In fact, I think there are just a lot of instruments, although I couldn’t say for certain what most of them are: things stringed and folky, reeded and snakecharmy, samplers, shakers and racket-makers. Voices are abundant, but the words could be in any or none of the languages Triple Negative speak. Gets pretty trancey and ritualistic at times, albeit with plenty of change-ups to pop your joints out, and it all amounts to Precious Waste In Our Wake being potent red diesel for fans of Royal Trux’s Twin Infinitives, Faust, Sun City Girls, Vibracathedral Orchestra and Part Wild Horses Mane On Both Sides." The Quietus
"Passages of abstract, energetic garage-psych and a previously unimaginable range of unexplored tone and texture (both electronic and acoustic) are weaved together with sensitive, understated jumble-sale genius!! Every ounce of this trio equipped with jaws capable of delivering the same level of writhing combustible haunting BITE and rhythm as This Heat."
An endearingly honest and outrageously artful sense of seemingly forgetful prowess - having played together for seventeen years (!) and only now releasing their debut album, “Precious Waste..” really gives weight to the idea that it can take a long time to sound like yourself. Triple Negative's entirely unique breed of dynamic chaos providing the thrill and bewilderment of observing that which is so close to collapse, evolve into a fully realised slab of INFINITE potential. Favourite thing we’ve heard in ages, cannot recommend highly enough." - Low Company
"An endlessly beautiful, dense and chaotic crawl through so many forms it can be difficult to ascertain what is actually at play. Ostensibly a ‘rock’ band carved from the same plank as previous outfits Philosopie Queen, The Mean Streaks, etc Triple Negative have shaken a somewhat complacent London with their wildly original blend of chaos and beauty rolling around a maelstrom of politics, spite and humour. Bloodclaat Orange, Fatna Bent Lhoucine, The Associates, Aby Ngana Diop, Royal Trux, Brigitte Fontaine/Areski, and Babyfather are all somehow wished into the scenario, either suggestively, explicitly quoted or manifesting as some malformed degree of inspiration." - Penultimate Press
_________________________________________
Jamaica!!
https://54thegate.bandcamp.com/album/vinyl-record
"Clumsy Jazz from Dalston, East London"
Jamaica!! is The Gate house-band. Based in Shepherds Bush, The Gate is an arts and resource centre for people with learning disabilities.
Last year they played at Cafe Oto a couple of times and collaborated with ṠḶẏ & Ṯḧḕ ḟḀṁḭḶẏ ḊṙṏṆḕ. They sometimes sound a bit like Triple Negative or The Dead C.
_________________________________________
Rhodri Davies w/ Viridian Ensemble
Viridian Ensemble is an ethereal blend of image and noise, which re-imagines folkloric forms and tropes of femininity. Improvisation of both sound and image (digital & analogue) produce a dialogic blend of textural depths. Dissociative states, keening, and the supernatural inspirit the ensemble. Each performance evokes utterances, nonsensical languages, and trans-species forms of communication through collective rhythm, tone, and resonance. Inspired by the vanguards of feminist free improvisation such as Les Diaboliques & Feminist Improv Group, as well as 16mm expanded film. In its current iteration, Viridian Ensemble is: Dali De Saint Paul (Vocal), Tina Hitchens (flute), Caitlin Alais Callahan (double bass), Esme Betamax (percussion) and Laura Phillips (16mm films & sound responsive digital projections, waterphone). Viridian Ensemble encourages and invites new configurations and collaborators. For the March 7th performance they will be joined by a special guest artist: RHODRI DAVIES on electronic harp.
Rhodri Davies was born in 1971 and lives in Swansea, South Wales. He plays harp, electric harp, live-electronics and builds wind, water, ice, dry ice and fire harp installations. He has released four solo albums: Trem, Over Shadows, Wound Response and An Air Swept Clean of All Distance. His regular groups include: HEN OGLEDD, Cranc, a duo with John Butcher, The Sealed Knot, Common Objects and a trio with John Tilbury and Michael Duch. He has worked with the following artists: David Sylvian, Jenny Hval, Derek Bailey, Mark Fell, Kahimi Karie, Laura Cannell, Lina Lapelyte, Sachiko M, Bill Orcutt, Jim O’Rourke, Christian Marclay and David Toop.
_________________________________________
DJs in the bar until late.
Concession tickets - due to the limitations of space at the Cube and the costs involved with putting on this event, we can only offer a very limited number of concessions tickets. Please only purchase such a ticket if you really cannot afford a full price ticket.
Posted by 54 the gate at 15:39