Our Radio Show has been on hiatus whilst covid has been playing havoc with everything,  however, from this week forward we will be broadcasting new shows on our regular spot every Wednesday at 1.30PM -tune in on https://resonancefm.com/

In this latest show from yesterday Ritchie plays some his favourite tunes and Duane plays some of the tunes he has been creating to keep himself busy whilst locked down at home. Also featured are a couple of tunes by long time friends of the Gate The Carbonators, a band of musicians with and without learning disabilities from Croydon.

Black History Month: Our resident Hip-Hop artist 2Decks on some of the black artists who have inspired his own work. 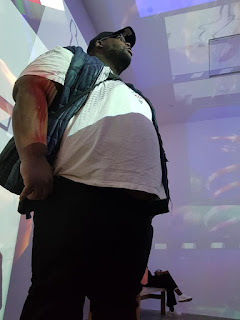 My Name is Darren aka 2decks and I'm a rapper and producer with mild learning disabilities. I started rapping between the age of 13 and 14 and learning to make my own music when i was 18 at a project called Big Bang to the Music Scene which was a project set up in Hammersmith and Fulham for young people in the borough who were interested in making music. I started coming to the Gate in 2003 and have been making music there ever since. The fist album I released was breakdown in 2009 and in 2012 I released the Wacky Baccy EP. Over the years i've played the Southbank Centre, The Albany, Brighton Dome, the Sonic Protest Festival in Paris and many others and at a festival attached to the 2017 olympics which was something I always that I always wanted to do so I could represent the disabled community.

Mainly by music is Hip-Hop based but I've also set up a band with other musicians from the gate (Leon, Josh and Roberto) and that's a bit more of a rock/rap crossover.

I think black history month is important because I live in the UK where history is mainly stuff like the battle of Hastings and the victorian times but you never really hear much about black historical people. And one of the things I think black people have contributed to a lot is music and also politics like Malcolm X and Martin Luther King but i'd like to talk about mainly about some of the black musicians. I think music has been very important for black people because It's been a way that they can make an impact on the world and have our voices heard because it's how we express our culture and our way of life.

The first artist who inspired me was MC Hammer and Public Enemy and last and not least OutKast and british hip-hop artists from Back in the day like Overlord X , silver bullet and MC Duke and also other artists outside of hip-hop like james brown.

I'd like to talk about these and give a favourite track from each and why I like them.

MC Hammer was the first ever artist I heard and when I heard it for the first time i had never heard Hip-hop before and I really liked his baggy trousers and his music videos. The song I heard was turn this mutha out which was released in 1988. Compared to how rap sounds now it's still a old school classic. MC Hammer sounds a bit like a preacher when he raps and he does things from his own point of view and I think a lot of my rapping is quite similar to his.

Public Enemy are another inspiration to me and a great band because they're very powerful and political and they tell the truth about what happens to black people. They talked a lot about the oppression of black people and I definitely think they had a positive impact on raising awareness of black issues. My favourite song of theirs is Don't Believe the Hype. I think the main way they've inspired is the power they put into their music because they really let people know they're there and they're not going anywhere. I went to see Public Enemy in Camden and it was really cool because i met Chuck D outside of the venue and that was really cool. 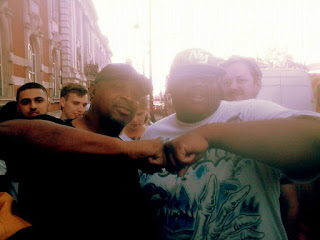 Outkast i really like because I especially like their album Skantonia which mixes up singing and rap and I remember watching a video of theirs where they mixed up a choir and guitars and rap and this way they mixed up different styles of music was very influential to me and also how they present themselves in a larger than life way. My favourite song of theirs is BOB.

Of the British rappers Overlord X is my favourite and the reason why is one day I was going through my brothers records and I stumbled across a record called X versus the world with a sick cover with him holding a ghetto blaster and with loads of aliens and stuff in the background and I listened to it and it blew my mind and I thought is was really cool the choices they made to sample because they were slightly weird and not too obvious. Overlord X was the start of the whole Grime scene in the UK and it sounds different now but I definitely think he was a big influence. He was the first uk rapper i ever heard and this was important to me because it was cool hearing someone rapping with the same accent as me so that made me think that I could do hip hop too.

James Brown is one of those guys who is really funky and when I first heard his music from back in the day like soul power i just thought it was amazing because it really grabs your attention and it's really in your face. James Brown uses a style of music he called "rhythm of the one" which is the way the band all work together and do things in unity and synch up with each other really quickly. I really like how he interacts with his band and his audience and I really studied how he performs on stage and how he uses the stage and how he get the crowd going and have definitely worked some of that into my own performances.